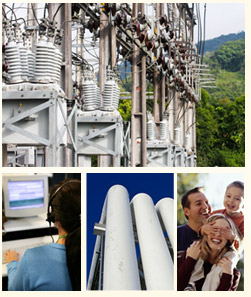 Centrais Elétricas de Santa Catarina S.A. – CELESC is one of the largest companies in the Brazilian electricity sector, with emphasis on distribution and power generation. Structured as a holding company in 2006, the Company has two wholly owned subsidiaries – a Celesc Distribuição S.A. and Celesc Geração S.A. In addition, it holds the controlling interest of Companhia de Gás de Santa Catarina (SCGÁS) and is a partner of Dona Francisca Energética S.A. (DFESA), Empresa Catarinense de Transmissão de Energia S.A. (ECTE), Companhia Catarinense de Água e Saneamento (CASAN) and of the project of Usina Hidrelétrica Cubatão S.A. Its controlling shareholder is the State of Santa Catarina, which holds 50.2% of the Company’s common shares, corresponding to 20.2% of the total capital.

The company brings energy to more than 3.0 million consumer units located in 286 municipalities of Santa Catarina (92% of the state territory) and in Rio Negro, Paraná. The company is also responsible for supplying electricity to serve four concessionaires and 16 licensees, which operate in the other municipalities of Santa Catarina. Celesc Distribuição is the largest individual ICMS collector located in the state of Santa Catarina, the 6th largest distributor of electricity in Brazil, 7th in volume of distributed energy and 10th in number of consumer units. Every month, the company distributes about 2.2 million MWh and its annual gross revenues reached R$ 12.3 billion in 2018.

is exempt from the concess

Celesc Geração is a subsidiary of the Celesc Group that operates in the electricity generation segment through the operation, maintenance, commercialization and expansion of its own generation park and participation in energy projects in partnerships with private investors.

The company participates in Specific Purpose Entities that enable new ventures in which Celesc Geração holds a minority interest. The following are the main characteristics of the projects:

The Company’s Strategic Planning foresees the appreciation of current assets through the expansion of its plants. Accordingly, the tables below show non-operating projects and their stages of development. Regarding the physical guarantee (new or incremental), the Company seeks on average 55% of the capacity factor of the total plant after expansion, a standard observed for other projects in operation with similar characteristics:

* Power plants with a power of less than 5 MW is exempt from the concession act (Law 13,360/16)
** Depends on regulatory procedures

All plants of own generation facilities and in partnership participate in the Energy Reallocation Mechanism – MRE, hydrological risk sharing system, in which the participating plants transfer energy generated surplus to its physical guarantee the plants that generated below.

In addition to the aforementioned projects, Celesc Geração has an equity interest in a transmission project, called EDP Transmissão Aliança SC, whose purpose is to implement lot 21 of ANEEL Auction 05/2016, with expected investments of R$ 1.1 billion.

The facilities aim to expand the system of the southern and plateau region of the state of Santa Catarina and will also allow Celesc to connect its distribution system to the new structure, in order to bring direct benefits to critical regions in the state’s energy system. The deadline for the execution of the works is 60 months and the start of commercial operation is set for August 2022, with the possibility of anticipation. The consortium that disputed the auction was converted into partnership in July 2017 and the Concession Agreement signed in August of the same year.

The project has been received the Environmental Installation License segregated be lots. At the end of 3Q19, four of the six requested were released, but were released in October and are therefore able to fully implement the project.

With 100% of the concession for the exploration of natural gas distribution services in Santa Catarina territory, the company markets and distributes about 1.9 million cubic meters of natural gas daily to approximately 13,5 thousand customers. SCGÁS has a concession agreement for the operation of piped gas distribution services, signed on March 28, 1994, with a 50-year term (2044). Below is a graph of Celesc’s interest in SCGÁS, with 51% of the common shares and 17% of the total capital stock

Incorporated with the specific purpose of exploring electric power transmission lines in the southern, asoutheastern and coastal regions of Santa Catarina, the company is a concessionaire of LT SE Campos Novos – SE Blumenau, with 252.5km of extension. The line is responsible for transporting about 20% of the assured energy to supply the demand in Celesc Distribuição’s concession area. In December 2011, expanding its business, the company auctioned the right to build the Abdon Batista (525/230kv) and Gaspar (230/138kv) substations through the subsidiary Empresa de Transmissão Serrana S.A. – ETSE. These lines were energized in January and March 2015, respectively. The affiliate ECTE has a power transmission concession agreement dated November 1, 2000, with a 30-year term. For its subsidiary ETSE, the electricity transmission concession agreement is dated May 10, 2012, with a 30-year term. Celesc holds 30.88% of the Company’s capital stock, as shown below:

Independent electricity producer, DFESA owns the Usina Hidrelétrica Dona Francisca, built on the Jacuí River in Rio Grande do Sul, with an installed capacity of 125MW and assured power of 80MW. The venture was opened in May 2001. The affiliate DFESA has a concession agreement dated August 28, 1998, with a 35-year term. Celesc owns 23.03% of the Company’s capital stock, as shown below:

A publicly-held mixed-capital company controlled by the Santa Catarina State Government, CASAN’s role is to plan, execute, operate and operate clean water and sanitation services in its (municipal) concession areas. Currently, the services provided by the company cover 193 municipalities in Santa Catarina and one in Paraná, serving a population of approximately 2.7 million consumers with treated water and 650,000 with sewage collection, treatment and final destination. Celesc holds 15.48% of the Company’s total capital stock, as follows:

Specific Purpose Entity formed in 1996 to implement the Usina Hidrelétrica Cubatão, in the Joinville/SC region, with an installed capacity of 50MW. With the history of environmental barriers, rejection of the postponement of the concession period and consequent economic unfeasibility for the development of the project, the project requested the regulatory agency to terminate the Concession Agreement 04/1996 (ANEEL Process nº 48100.003800/1995-89). On July 27, 2018 was issued an Ordinance MME 310, which decides to terminate the concession for the use of Hydraulic Energy of the project called UHE Cubatão. Celesc owns 40% of the Company’s capital stock, as follows: