On November 14, 2018, Celesc Distribuição S.A. won, in Buenos Aires, Argentina, the Silver category of the CIER Quality Award, which measured customer satisfaction among over 500,000 consumers for 53 companies in 14 Latin American countries. 87 companies participated in the CIER/ABRADEE ranking in 2018, of which 53 competed for the CIER Award.

This is the third consecutive year that the Company ranks among the top three companies in the sector, according to the annual assessment conducted by the Regional Energy Integration Commission (CIER).

On November 6, 2018, the Company was awarded in the Air Pollution Control category of the 20th Fritz Müller Award for the installation of one of the largest electric corridors in operation in Brazil (300 km in length), a project developed in partnership with Fundação Certi.

The Fritz Müller Award is granted by the Santa Catarina Environmental Institute (IMA) and is the main environmental recognition award in the state of Santa Catarina. The name of the Award is a tribute to the famous German naturalist Johann Friedrich Theodor Müller, who lived in Blumenau for 45 years. Considered a revolutionary, environmental scholar, and forerunner of ecology, Fritz Müller was claimed as the prince of nature observers.

The Fritz Müller Award is granted for projects and initiatives that go beyond environmental legislation and bring benefits to environmental conservation. Public and private companies, institutions, government agencies, cooperatives, NGOs, institutes and organizations operating in Santa Catarina can participate, so long as the projects are developed in the State.

In February, Celesc Distribuição received the IASC Award (ANEEL Consumer Satisfaction Index), which recognizes the best distributors according to residential consumers’ perception. The award was granted by the National Electric Energy Agency (ANEEL), as the Company was voted as the 2nd best in terms of client satisfaction. For the evaluation survey, Aneel consulted consumers from 584 Brazilian municipalities. Within Celesc’s concession area, the level of client satisfaction reached 73.9 and the national average index for the category was 62.28. IASC is an indicator that measures residential consumer satisfaction with the services provided by the electricity distributors and is obtained annually from a sample survey carried out among consumers from all distributors, concessionaires and licensed operators across Brazil. 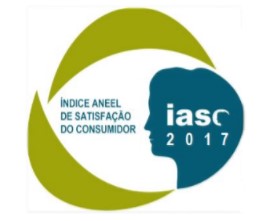 In research conducted by the Brazilian Association of Electricity Distributors (Abradee), Celesc Distribuição reached a customer satisfaction level of 84.3% (versus the national average of 76%), ranking 5th among companies with more than 500 thousand clients.

Overall, Celesc Distribuição ranked 11th among 32 participating companies in the over 500,000 consumer category.

Editora Expressão awarded 29 environmental projects among 126 participants in this historic 25th edition of the Ecology Expression Award, the largest environmental award in the South region and the oldest in the country. During the past 25 years, the award received 2,643 cases studies form companies, NGOs, municipalities and entities in the region.

The Ecology Expression Award is supported by the Chico Mendes Institute for Biodiversity Conservation (ICMBio) and the three southern public environmental agencies, SEMA/IAP (PR), IMA (SC) and SEMA/FEPAM (RS), which have representatives in the select group of judges responsible for selecting the best environmental actions.

For the second consecutive year, Celesc Distribuição ranked 1st in by the National Electric Energy Agency (ANEEL) in terms of quality of call center services among distributors with over 500,000 consumer units. The Company’s Service Level Indicator (INS), which is the percentage of calls answered within 30 seconds of total calls received in typical periods, reached 97.80%, above the minimum indicator of 85% required by the regulatory agency.

The Celesc brand was highlighted in the February 16th issue of the Estado de São Paulo newspaper as one of the 11 companies that stood out nationally for promoting innovation with sustainable technologies, and received the ECO Brasil Award, an initiative by the American Chamber of Commerce (Amcham), supported by Grupo Estadão and sponsored by Bayer Brasil.

Celesc won three categories of the OSE Electrical Installations Quality Award – Santa Catarina Edition, at the 34th National Electric Sector Circuit – CINASE, promoted by the O Secor Elétrico magazine, in Florianópolis. The Company ranked 1st place overall and in the Research & Development categories with its Eletropos project, which already offers over 300 km of self-sufficiency for electric vehicles to circulate within the state, and in the Renewable Energies category with its Efficient Photovoltaic Line Bonus project that promotes the micro generation of energy through the installation of solar panels at a more affordable prices.

Celesc was honored at a special session at the Santa Catarina Legislative House on June 12, 2019, the World Day against Child Labor, due to its efforts in eradicating child labor. Institutions such as the Superior Labor Court, the National Forum for the Prevention and Eradication of Child Labor and FIESC, among others, also received mentions.